No one would have dreamed of wearing a black dress on the wedding.  It’s much more popular today, but not embraced by all. Explore the dilemma of wearing black to a wedding: is it elegant or disgraceful?

As with any fashion decision, the choice of a suitable wedding outfit depends on the context.  The geographical area, time of the day and venue for wedding must be considered before taking any decision. For example, you’d look out of place if you’re invited for an evening wedding in a loft and you did not wear black. On the contrary, the guest who comes to Savannah for an afternoon wedding with a black frock, gets some weird looks. She’ll also feel super-hot in a black colour outfit on a sunny day. Here the black dress would not only be awkward, it would also be illogical.

The bride’s personal style would also be an element in deciding this. The trendy young woman who has a wardrobe entirely designed around black is unlikely to offend her guests at that hue. The young woman who prefers pink twinsets and pearl wedding gems might dislike her guests who wear the black colour outfit. Bear in mind that it is not just the bride whose opinion is relevant in this regard; she may think it’s all right, but her mother and grandmother may also not like it. The older generations were brought up to the belief that wearing all black to a wedding was nothing less than a scandal. You may not agree with it, but there is no need to make them upset. 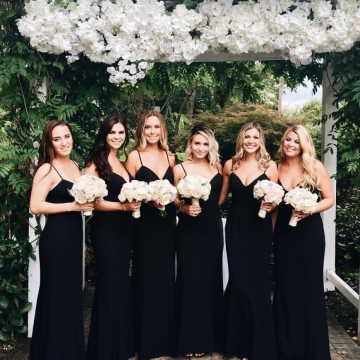 There is a person who should never think about wearing a black dress on the day of the wedding, and that’s the bride’s mother. While some of them wear black, in this way, you run the risk that people will perceive your colour choices to be against the marriage (which was the conventional sense of making this choice). It’s too many even if one guest feels that. That’s not to suggest that the mother of the bride should wear baby blue or lavender only. A platinum colored dress with exclusive jewelry would also look elegant and much more suitable for the occasion.

However, it is not wrong about having black clothes in a wedding, but is nevertheless glared upon in many places. Why not think about moving away from the simple black and doing something different with so many other colour choices? At least you are sure that you won’t offend anybody and look amazing.

Our websites and dashboards use cookies. By continuing, you agree to their use. Learn more, including how to control cookies.

This website uses cookies so that we can provide you with the best user experience possible. Cookie information is stored in your browser and performs functions such as recognising you when you return to our website and helping our team to understand which sections of the website you find most interesting and useful.

Strictly Necessary Cookie should be enabled at all times so that we can save your preferences for cookie settings.

If you disable this cookie, we will not be able to save your preferences. This means that every time you visit this website you will need to enable or disable cookies again.